South Korean drama “Squid Game” has caught worldwide attention as it vividly portrays the cruelty of capitalist society through children’s games played by a group of oppressed debt-ridden for money .

The dystopian drama, which debuted on Netflix on September 17, garnered more than 111 million views in less than four weeks, becoming the streaming service’s most-watched series.

Created by South Korean director Hwang Dong-hyuk, “Squid Game” tells the story of 456 people experiencing various types of financial stress who participate in a survival tournament, consisting of children’s games, in the hope of win a cash prize of 45.6 billion won (US $ 38.7 million).

Capitalist cruelty is on display at the start of the series. In the first episode, participants are shot at red light and green light when a strange schoolgirl doll finds them moving, indicating that falling behind in the competition of capitalist society leads to a survival contest.

In the second episode, the survivors of the first game decide by vote to quit the competition, but they voluntarily and inevitably return to risk their lives for money as their reality is no better than the game of life or death. .

“Squid Game” overcame cultural and language barriers to achieve worldwide success by telling the story of unhappy people, with whom the global audience can sympathize and empathize.

“Since the outbreak of the pandemic (COVID-19), wealth disparities have widened around the world amid the growing number of people suffering from economic hardship. Even vaccines cannot be delivered properly to poor countries.” , director Hwang said in an interview with local broadcaster JTBC. .

“The characters in ‘Squid Game’ are closely related to people in the real world, so (viewers around the world) seem to sympathize with the characters. Because the same thing is happening all over the world, (the series) seems to be winning the game. ‘global empathy,’ says the director.

The story is told primarily from the perspective of Seong Gi-hun who was fired from a car manufacturer after protesting against the restructuring of the company. He is harassed and beaten by pawn shops but still gambles to pay off his debts. He has a sick mother and doesn’t even have the money to buy a birthday present for his daughter living with his divorced wife.

In the competition, Seong meets his childhood friend Cho Sang-woo, who was an elite working for a securities firm after graduating from a prestigious university but is now wanted by police for embezzling millions of dollars. dollars after the failure of a speculative equity investment. future.

Participants, including Seong and Cho, form alliances to survive but are ultimately forced to betray even friends in the sixth episode, titled “Gganbu,” a South Korean slang used by the older generation which means a close friend with whom you can share everything.

In the sixth episode, Seong and Cho select their respective Gganbu to team up before starting the marbles game. They belatedly realize that they have chosen opponents rather than teammates and that they can save themselves with the death of their Gganbu.

Seong survives by cheating on an elderly man, who knew about the deception but willfully lost the game because he viewed Seong as Gganbu, while Cho betrays a naive Pakistani immigrant worker who trusted him to the end in thanks for Cho’s money for the bus.

As the game progresses, the participants lose more and more humanity, and dehumanization comes to a head when “VIPs” arrive at the game site and start betting on whoever dies next.

“I would like to ask questions every now and then about why we got drawn into this hyper-competitive society and who set the rules of the game. These are questions about politics and also about the system,” the director said. .

“Questions should continue to be asked about why society operates like this. When we live as if we are being pursued, we can die like pieces on a (Korean) chess board,” he noted.

The VIP appearance makes the public suspect that it could be one of the pieces of the real world chessboard, like the participants in “Squid Game”, where the underdogs are pitted against each other to survive then. that a small number of rich orchestrated it to play with the lives of the poor for fun.

The old man, who lost the game of marbles to Seong, turns out to be a supreme predator in social strata, as the elderly do not need to die for defeat in the game, designed and operated by him- even, because of his possession of wealth. .

The game’s competitors, who represent the destitute, have no individuality as seen in the costumes. They wear the same green tracksuits and are addressed as unnamed numbers, indicating their insignificance and replaceability.

The guards, who represent collaborators for the rich, wear the same pink coveralls with guns, but their faces are covered in masks. The Front Man, the leader of the guards, wears a more distinctive mask, donning a hoodie with matching leather pants and gloves.

The VIPs, played by white Western actors, wear different types of dazzling animal masks to clearly show their individuality, while the predator at the top enjoys complete freedom of what to wear as he is dressed in green tracksuits to join the party. Game.

A South Korean film critic has been quoted by local media as saying that “Squid Game” blatantly reveals the violence of the era as seen in characters who purposely became pieces of the chessboard beneath it. hold of capital. 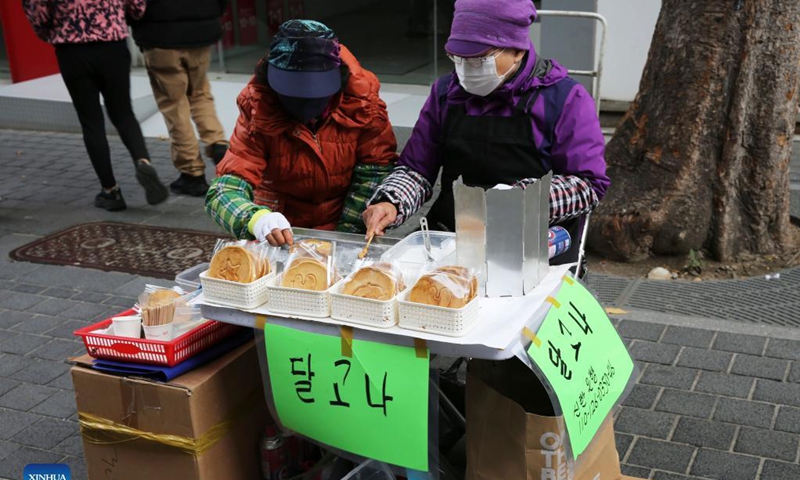 Street vendors sell dalgona candy in Myeongdong shopping street in Seoul, South Korea on November 13, 2021. Dalgona is an important part of the South Korean drama “Squid Game”, with a deadly version of the dalgona challenge being the second. game played in the series. Photo: Xinhua 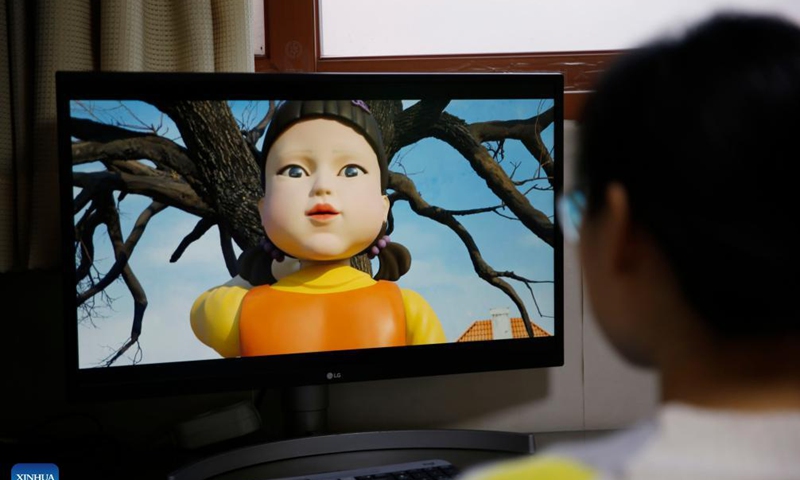 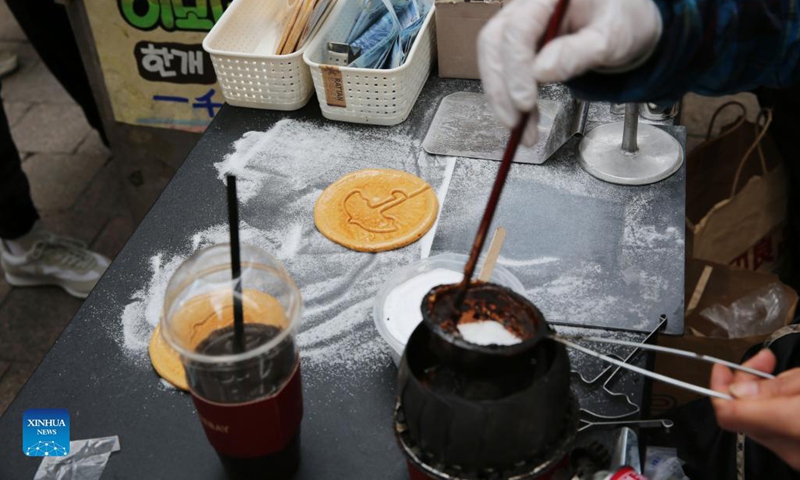 A street vendor bakes a dalgona candy in Myeongdong shopping street in Seoul, South Korea on November 13, 2021. Dalgona is an important part of the South Korean drama “Squid Game”, with a deadly version of the dalgona challenge being the second game played in the series. Photo: Xinhua